A real fairy tale awaits you on one-day tour to Arshan! Down caps of treetops, blue, green, black, white ice of Lake Baikal, sun, walk along the lake on foot and by car, hot springs with amazing views of the majestic snow peaks bring resemblance to the Swiss Alps and Tibet at the glance of a globe rover.

Tunka Valley is justly the most unique place of Pribaikalye, covered with a mass of ancient legends. The way of Genghis Khan and his large army went along the bank of the river Irkut many centuries ago. Numerous sacred places, some of which are thousands of years, miraculous mineral springs, majestic mountains of the Sayans, surrounding the picturesque Tunka Valley, give the impression of an unreal place.

The 200 km-long Tunka Valley is an extension of the Baikal Trench and is unique in its healing springs and alpine meadows. To the west, the valley is bounded by the high mountains of the Eastern Sayans with alpine scenery, and from the east – the less steep slopes of the Hamar-Daban mountain range. The mountains frame the valley with high rings start immediately from the flat meadows and rise to a height of up to 2500 meters. At the end of September, the tops of the mountains are covered with snow caps and look spectacular against the background of the coloured foliage of the valley’s woodlands.

Each mineral spring of the Tunka Valley and there are almost 400 of them here, differs from the others in terms of temperature, mineralization, taste, and the level of carbon dioxide and radon.

In the middle part of the Tunka Valley, the River Irkut has the character of a calm valley river and flows leisurely among the steep banks, often forming loops, old channels, intricate bends with sandy beaches. The combination of mountains, rich greenery, beautiful lakes, crystal clear rivers creates unique picturesque landscapes of the valley.

Although people began to render habitable the Tunkа Valley since time immemorial (the settlements of ancient people dating back to the age of 13.5 thousand years), the nature of Tunka has remained almost in its original state.

The village of Arshan is the most famous village in the Tunkа Valley. The Buryat word “arshan” means “healing water, healing source.” At the end of the 19th century, Russian settlers got to know about healing mineral springs. And by the end of the 19th century, the spring already had 52 yards of residents and 40 summer houses for holidaymakers. Since then, a lot of guests come to Arshan for miraculous water and health. Visit the hot springs on the one-day tour to Arshan. The tour might be combined with a guided visit to the indigenous Shaman.

Attractions of Tunka valley and Arshan 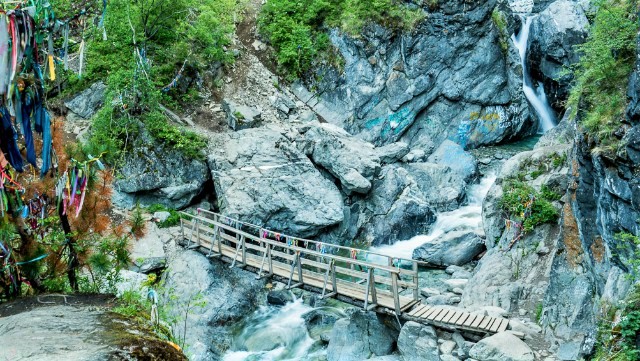 There are 7 mineral water outlets in Arshan. Arshan springs belong to mineral waters such as carbon-hydrocarbon-sulfate-calcium-magnesium waters. Near the village of Arshan, there is a picturesque marble canyon of the mountain river Kyngarga and on the left bank of the river, there is a tourist hiking trail. From here you can walk to a series of waterfalls from 3 to 7 meters high. In total, there are 12 small waterfalls in the river. “Kyngarga” is translated from the Buryat language as “drum”. The length of the river from its source to its mouth is about 27 km. Waterfalls are in the upper reaches of the river, the highest of them is up to 7 meters.

The Khoimor Buddist temple, a dastan, was restored in 1991 in the area of the Holy Valley near the village of Arshan. It was originally built in 1917. The tradition of this datsan included the performance of a very peculiar rite of Genghis Khan worshipping. Majestic cedars are picturesquely scattered around the territory of datsan. Visitors make a wish next to them and they claim it often comes true.

There is also an Orthodox church in Arshan. This is the church of Peter and Paul. The church, attributed to the Temple in Kaimorah village was built in Arshan in 1915 and then was brutally destroyed in the 20th century. 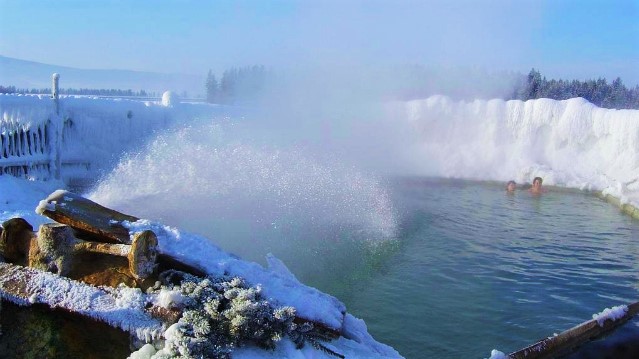 50 km from Arshan on the banks of the Irkut River there is a balneological resort area called Zhemchug.
Its thermal water has no analogs in the WORLD. The water of the Zhemchug hot springs is unique and combines methane and carbonic thermal waters, with a small content of hydrogen sulfide and radon.
Water is used to treat diseases of the musculoskeletal system, the consequences of injuries to the musculoskeletal system, peripheral nervous system, skin, female and male reproductive organs. Water also has a general strengthening and immune-enhancing effect, hot water stimulates blood circulation, helps to remove toxins from the body. Water pressure on the skin allows muscles to relax, and a massage effect occurs.

There are two swimming pools in the Zhemchug resort, water temperature is 36 and 55 C. It is especially pleasant to swim in the pools in winter, during the falling snow.
Don’t forget to take with you:
– swimsuit;
– towel;
– rubber slippers.

Visit to a Shaman

Shamanism is one of the most ancient religious traditions of mankind, preceding the emergence of world religions. Pagan beliefs associated with the veneration of ancestor spirits, gods, and goddesses of Heaven and Earth go back to ancient times as far as Neolithic.

A shaman is a person who interacts with both the normal world and the world of local spirits. The Buryats (the native people) believe that the Shaman has a special connection to the spiritual world.

Since the mid-1980s, shamanism has been revived throughout the entire Siberia and everywhere in the Tunkа Valley.

Book the one-day tour to Arshan and meet an indigenous Shaman. You will be able to ask the Shaman all your questions, take part in the rituals of the Shamanism. 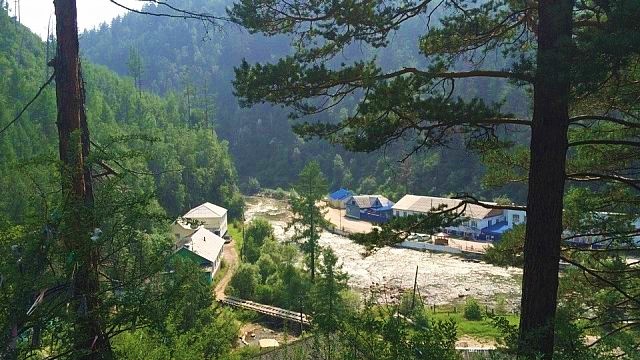 In the East Sayans, 265 kilometers from Irkutsk, at an altitude of 915 meters above sea level, in the gorge of the Uhe-Ugun River, an eco balneal resort of Nilova Desert is hiding from crowds of holidaymakers. Its radon springs cure bones, joints, skin, and nervous system.
And rumours about healing waters reached the ears of V.Y. Rupert – Governor-General of Eastern Siberia. In the late 1830s, he instructed the Turan Border Patrol unit to study the area next to the springs. In 1840, a commission consisting of a medical inspector Sorochinsky of Irkutsk Medical Board and a pharmacist Mr Kulau conducted researches of the water composition to determine its medical properties. Radon springs which contain a large amount of silicon acid and fluoride were deemed unfit for drinking but very good for health as baths.

Soon the Archbishop of Irkutsk and Nerchinsk Neil Stolbensky became interested in this place. The Archbishop initiated the construction of the balneal resort. In 1852, Tsar Nicholas I approved the order of “Establishing of the Men’s Convent in the name of the notorious Nile Stolbensky”, and the resort was named Nilova Desert. And still, many tourists come to the resort of Nilov Desert for health and good moods.

There is another Buddhist datsan 4 km away from the Nilova Pustyn resort in a dense forest at the foot of Mount Sagaan Khairhan.
Burkhan Baabai is a shrine of the inhabitants of the Tunkin Valley and means “White Sand” in Buryat language. Amazing patches of white quartz sand come to the surface of the slopes of local mountains. A legend tells that Shargai-Noyon descended from the sky on a grey horse, in the full armament of a nomadic warrior, his racehorse dug the slope of the mountain and gave rise to white sand which is enchanted and may be used as a talisman for soldiers and defenders of the motherland. The place is not only a religious, but also a cultural and historical lure of the region. There is a Buddhist Jalsan building on the territory of the shrine.

Shumak is the name of a river, its adjacent area, and the mineral springs of the area. Mineral springs are located on the slope of the Tunkinskiye Goltsy at an altitude of 1558 m. There are more than a hundred outlets of mineral springs along the banks of the Shumak River. Read more… 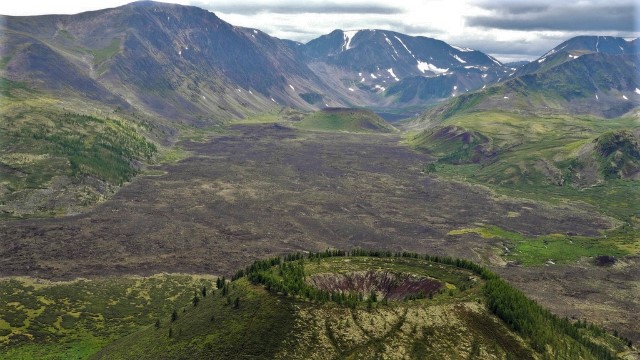 Valley of Volcanoes is set in Hi-Gol’s Deep in Tunka Valley here the traces of volcanic activity are well preserved. According to the Buryat legend, the tops of dormant volcanoes are the remains of the burnt-out palace. Geser a national Buryat hero set fire to it with his burning arrow. Thousands of years ago, there were still eruptions in the valley that flooded the valley with burning lava. Frozen lava now extends through the plains of Hi-Gola and Yombolok for 70 kilometres, and its thickness can reach 150 meters in some places. In the centre of the lava fields, there are two old volcanoes – Kropotkin’s and Peratolcin’s. They have a shape of a truncated cone and appear smaller than the mountains surrounding them but if come closer their size is impressive.

The radioastrophysical observatory is located in Tunka district, the Buryat Republic, tract Badary. It was put into pilot operation in 1984. The observatory belongs to the Institute of Solar-Earth Physics of the Siberian branch of the Russian Academy of Sciences. The main instrument of the observatory is the Siberian Solar Radio Telescope. There are two operating observatories next door to each other in Badary: one is radiophysical and the other is radio astronomical. Local inhabitants call them “Sunny” (Solar Radio Telescope) and “Leningradka” (Radioastrophysical observatory Badary).

The Siberian solar radio telescope, “Sunny” or SSRT, is one of the largest astronomical instruments. It is located in a forest-covered scenic valley separating the two mountain ranges of the Eastern Sayan 220 km from Irkutsk. It is a cross-shaped interferometer consisting of two lines of 128-128 parabolic antennas with a diameter of 2.5 meters, installed ecvidistly with a step of 4.9 meters and oriented in the directions of east-west and north-south. “Sunny” is located on a flat platform overlooking the mountains. Not a holidaymaker will remain without a bunch of interesting photos in any weather in Badary.

“Leningradka” (Badary Radioastrophysical observatory) is a part of the network of three observatories, the first of which is located in Leningrad region, the second is located in Karachay-Cherkessia and the third is in Badary. The network is run by St. Petersburg Institute of Applied Astronomy of the Russian Academy of Sciences; most likely, because of this, the Tunka Observatory got such a nickname from the locals.

Three terrestrial radio telescopes, working in sync, must form a giant triangle capable of receiving and registering radio emissions of various space objects. Radio telescopes are equipped with precisely synchronized hydrogen time services. They can only make a half-second error in 100 hundred years. The data control and processing centre of this mega-radio telescope are located in St. Petersburg Institute of Applied Astronomy of the Russian Academy of Sciences. The “Quasar” project will open a new stage in the study of the universe scientists believe. Using this technology, you can penetrate the nucleus of the galaxy, the centre of the quasar, explore the earliest state of the universe, and even look inside the Earth.

How to get to Radioastrophysical observatory Badary: You can get to Badary taking a route through Tunka (one of the villages of Tunka district), just passing it, without leaving the main road. If in doubt, you can ask the way from the locals who are accustomed to such questions. Or check a map. In 23 kilometres the road will turn right to “Leningradka”, which will remain five hundred meters away. If you do not turn a kilometre away from it there will be an entry to “Sunny”. The distance between the observatories is one and a half kilometres. 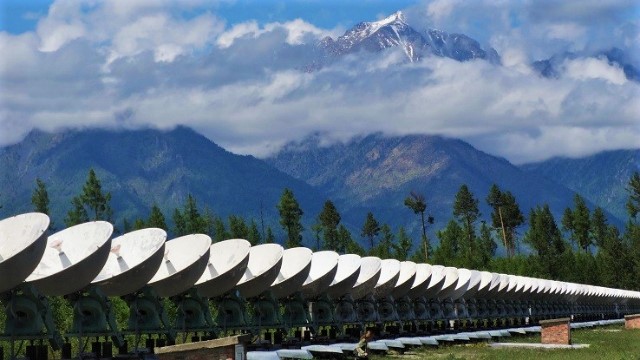