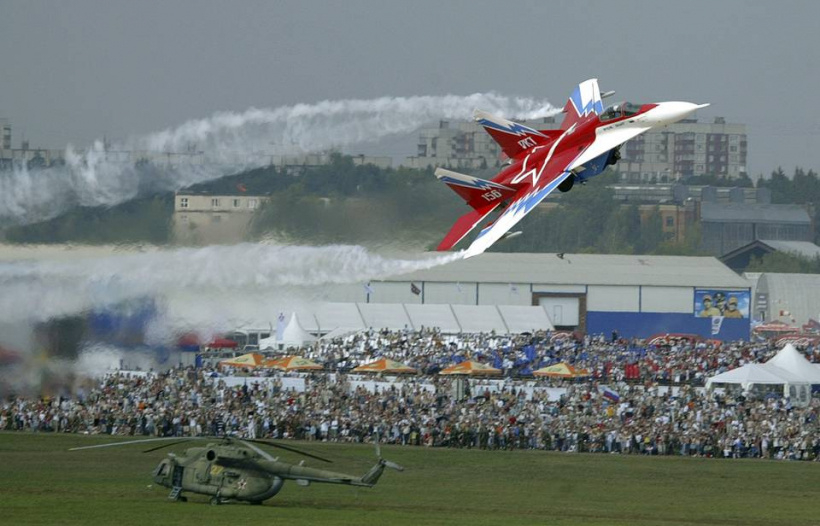 The MAKS Air Show traditionally hosts the most significant flight programmes in the world both in terms of the number of aircraft in the sky and the total duration of flights, and of course, MAKS Air Show 2021 will not be an exception. The sky over “Ramenskoye” airfield in Zukovsky will gather the best Russian and foreign pilots who will demonstrate the unique capabilities of military and civil aircraft.

In addition to the demonstrations of Russian and foreign-made airplanes and helicopters, MAKS Air Show 2021 will feature performances by several aerobatic teams. They are permanent participants of all MAKS Air Show events. The teams will impress you with their spectacular and technically perfect programs. The most famous aerobatic teams of the Russian Aerospace Forces are the “Russian Knights”, the “Swifts” and the “Falcons of Russia”. The fighter jets they perform with are the pride of the Russian aircraft industry.

Besides, the Russian aerobatics school will be represented by the “Russ”, an aerobatic team of the Russian Army, Air Force, and Navy Volunteer Society. The team’s performances are famous for precise and well-coordinated maneuvers.

By the way, if you would like to fly an L-39 jet with the “Russ” aerobatic team, you are welcome to book our tour “L-39 Jet Flight”.

As a good tradition, MAKS participant’s list will include the “Baltic Bees”, an aerobatic team from Latvia. The team has earned the audience recognition thanks to eye-catching aircraft coloring, dynamic maneuvers, and extremely low-distance flights.

The MAKS Air Show won’t be limited to jets. Such general aviation teams as the “First Flight” and “Colibri” flying light piston aircraft will show keen and tough competition to swift jets in the sky.

MAKS Air Show tour by boat
During the MAKS events, transport arteries at the entrances to Zhukovskiy town are experiencing huge overloads: traffic jams stretch from the Moscow Ring Road. The trip by private car turns into a headache.

Reaching Zhukovsky by River, the ship will take the most advantageous position for the flight viewing.

Annually, teams from 23 countries are taking part in the Tank biathlon. The teams will show their skills in driving, shooting and overcoming insidious obstacles.

ALL customers rated our service in Tripadvisor as "EXCELLENT". Russia E-Guide is dedicated to the best service quality, and this is reflected year after year.