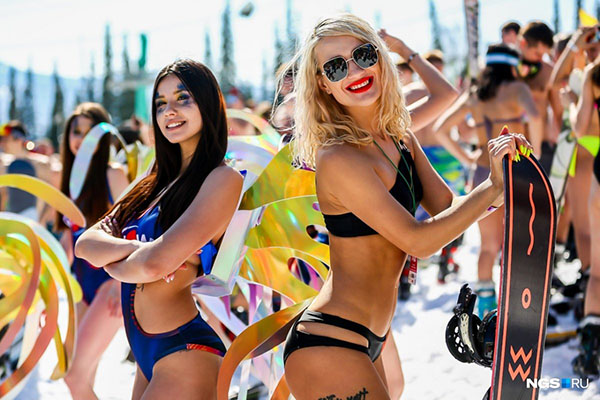 Sheregesh is a settlement in Tashtagol district of Kemerovo region (Mountain Shoria) located between the Altai and the Sayan Mountains at the foot of Karitshal Mountain. The alpine ski complex Sheregesh is known for its large amount of snow and backcountry skiing.

Sheregesh is a settlement in Tashtagol district of Kemerovo region (Mountain Shoria) located between the Altai and the Sayan Mountains at the foot of Karitshal Mountain. The mountain has one more local name – Green Mountain, received for its bright green colour in the summer season. This feature is most clearly seen against the background of the other mountains having grey colour.

Sheregesh received its name after Sheregeshev brothers who discovered a deposit of iron ore in 1912. The indigenous people of Mountain Shoria are the Shors.

The Shors are a nationality in Russian Federation mainly inhabiting Kemerovo region, Khakassia, the Altai Republic and some other regions. The population is 16,6 thousand people. They mainly inhabit the middle part of the Tom River basin and its tributaries Kondoma and Mras-Su. Until the 19th century the main trades of the Shors were smelting and forging, that was especially developed in the North. By the end of the 18th century the Shors forged products failed the rivalry with the Russian articles, and the forging gradually disappeared, leaving hunting as the main trade.

The traditional worships are trading, family, shamanism, and the worships of mountain and river spirits. The Shors shamanism had family nature – the shamans inherited their gift and patron spirits from their ancestors. The modern Shors partly preserve the traditional believes, mythology, the funeral ceremonies, and the way of communication with spirits in a trance state.

In the vicinity of Sheregesh you can enjoy outstanding magnificent nature. The favourite tourists’ route is the route to the 15.5m high metal Wayside Cross on Kurgan Mountain. On the way there, along the western part on the Mustag massif, the Camels and Saviour Palaces buttes can be seen. The famous Azas cave is situated a bit further from Sheregesh and its slopes. According to the legends, the Yeti footprints were found here. The Mountain Shoria Ethnography and Nature museum is situated in Tashtagol (21km away from Sheregesh) and an open air ecological museum Tazgol is located in Ust-Anza village (60km away). Other attractions are multiple caves in the Mras-Su River basin and Saga Waterfall.

However above all Sheregesh is widely known for the ski resort of the same name.

10 Reasons to visit alpine ski resort Sheregesh:
1. November through March there are 2-4 m of high quality snow. Being crisp, light and dry, local powder is considered to be the Russia’s finest snow.
2. The variety of the terrain and trails make ski resort Sheregesh attractive for all level skiers. The skiing zone comprises 4 hills ranging from 120-680 meters. The beginners can use a magnificent long bunny slope at the foot of the mountain, while the expert skiers can enjoy the natural off-piste terrain with steep slopes.
3. Sheregesh ski resort starts operations in November, earlier than anywhere else in Russia. The full skiing season lasts six months. Although the slopes close around late April, several lifts stay open in the off-season to bring tourists up the mountain for picturesque views.
4. Sheregesh boasts a well-equipped infrastructure: ski and snowboard rent points with up-to-date equipment, well maintained slopes and chairlifts. Standard resort attractions like cafes and bars, night clubs, a casino and a bowling centre can be also found there. Almost every hotel can offer a sauna. In the winter period a skating rink is available.
5. The remoteness of the resort means uncrowded slopes and almost no lift queues. The ski area is big enough to conceal a decent amount of untouched powder to ski.
6. Apart from skiing and snowboarding, a lot of attractions and activities are available in the resort: snowmobile trips, tracking, helicopter rides, etc.
7. Prices of Sheregesh are cheaper than those of European resorts are.
8. Because of the low altitude of Sheregesh mountains, there is no fear of avalanches. The forest on the slopes also prevents avalanches.
9. The trails satisfy the requirements of international standard FIS. The stages of the President’s Cup and of the Cup of Russia on snowboarding are held here. The Russian snowboard team trains in this region.
10. The famous Russian festival Grelka Fest takes place on a slope of the resort in spring, when temperatures range from +10 to +15 degrees and the snow does not melt.