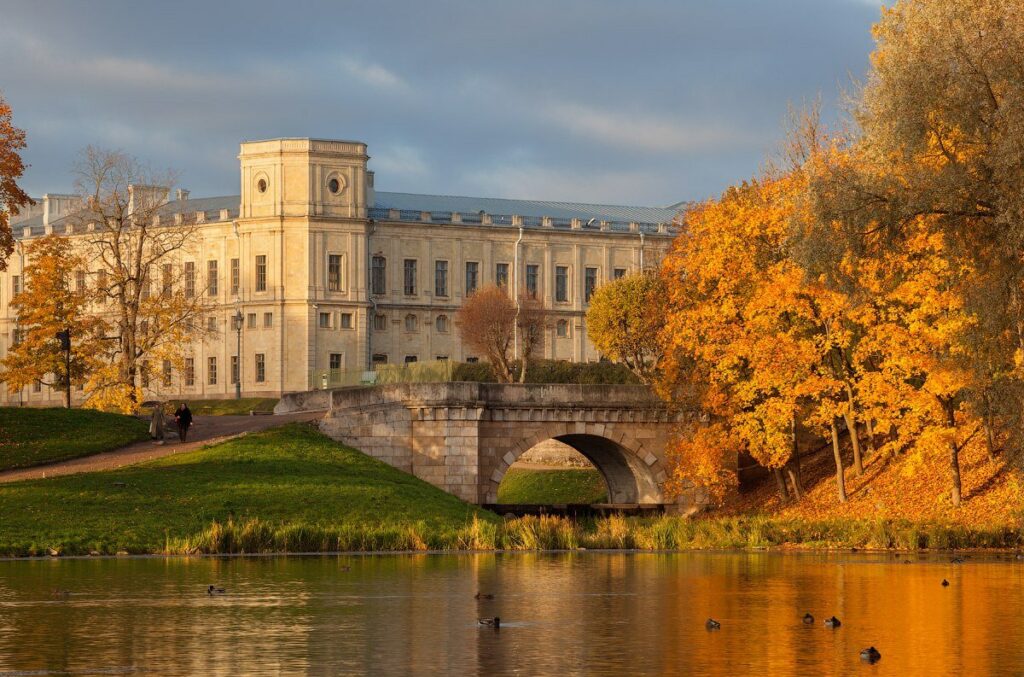 The palace and the park in Gatchina appeared during the reign of Catherine II. In 1765 the Empress gave her favourite Grigori Orlov a luxurious present – the Gatchina estate. The land was so rich in picturesque views and spring lakes connected with rivers that the new owner decided to create there an English landscape park with a magnificent palace in the centre. Gatchina is actually one of the first English landscape parks in Russia.

In different time periods the estate was owned by the emperors Paul I, Nicholas I Alexander II and Alexander III.

The residence was severely damaged during World War II. The reconstruction of the Gatchina palace started in 1976 and more than 8,000 exhibits returned to their places after the museum was opened in 1985. Nowadays the estate is regaining its original look, the museum collections are being replenished. Some objects are still preserved in other museums but will be returned to Gatchina in future.

The residence was owned by Peter II, Catherine II, Alexander I and others. After the Revolution of 1917 the estate was used by educational and military institutions and hospitals. During World War II the estate was in the fascist encirclement but due to the courage of the Soviet soldiers the palaces and the pavilions with all the collections were preserved intact.

The park of Oranienbaum, covering the territory of 162 hectares, is a precious example of the 18th-19th centuries park art.

How to get to Oranienbaumfrom Saint-Petersburg:

The Gatchina Park is one of the most beautiful and mysterious parks of St Petersburg.

Start your tour in the park from the Jordanian porch. You will observe the Silver meadow and the opposite shore of the White Lake. After that you can visit the Private Garden, the Palace Gardens (the Linden, the Upper and the Lower Dutch gardens), the Carp Bridge, the Carp Pond, a number of bridges (the Corps de Garde Bridge, the Three-Arched Bridge and the Big Ferry Bridge) and the Admiralty building. The Silver Lake with the Echo Grotto and the Octagonal Well make a great impression on visitors.

You can also take a water tour during which you will enjoy the views of the White Lake and its islands and see the main constructions of the park: the Chesme Obelisk, the Grand Terrace and Dock, the Venus Pavilion on the Island of Love, the classical Large Stone Bridge and the Hunch Bridge.

Botanical Gardens are really worth seeing: beautiful flower parterres and ponds, the Water Labyrinth with bridges and waterways and the Woods Labyrinth with tangled walkways are very attractive.
If you love mysteries, you will definitely enjoy the Amphitheatre and the Eagle Column from which you will also see the Eagle Pavilion in the southern part of the park and the Sylvia Park with a stone
fence and an 18th-century gate.
Photo by The Gatchina Palace and Estate Museum

Do not hesitate to take a long walk: you will see a magnificent stone pavilion Farm with an ice house and a well, and a romantic Aviary on the bank of the Kolpanka River. What you will see next depends on the path you choose to return to the palace. You can visit the unique Cold Baths, the Forest Orangeries, a number of stone gates (Black, Solid, Animal, Cascade and Admiralty). If you feel thirsty, you can try spring water on Topky Island; it is potable. The Birch Log House and the Mask Portal surrounded with mighty oaks and delicate ash trees are beautiful any time of the year.

The Venus Pavilion is situated on the Island of Love. A triangular-shaped island is separated from the mainland with artificial canals. Vincenzo Brenna designed the small building for the Grand Duke Pavel Petrovich who saw the same pavilion at Prince de Conde’s estate in France.

The Private Garden was intended for the royal family only. The Grand Duke’s private rooms on the ground floor over
Photo by The Gatchina Palace and Estate Museum

looked the Private Garden. The Emperor could get to the Garden from his study in the tower by a terrace and a flight of stairs guarded by two sphinxes made of local limestone. The most remarkable objects in the Garden are 18th century marble statues. The statue of the goddess of flowers Flora by Fabio Medico is in the very centre of the Garden.

The Birch House was constructed in 1780s.It looked like a pile of birch logs stored for a long winter. It was an 18th century pastoral caprice, when plain-looking facades were hiding a magnificent interior with luxurious wall painting, gilded plaster work, and a great number of mirrors. All the guests of the residence were amazed by this contrast.

In 1796, the Portal Mask was erected under the guidance of architect Vincenzo Brenna. This gateway screened the Birch House.

One of the attractions of the palace is an underground passage to the Silver Lake that was constructed when the residence was owned by Grigori Orlov. The entrance to the passage is located in the state rooms. First, the visitors find themselves in the basement and then go along a 130 meter-long tunnel faced with limestone and lit by four round windows. The exit from the passage facing the Silver Lake was named the Echo Grotto because of its good acoustics: the echo repeats up to four syllables.

The three-storied central part of the building has two towers rising above it to the height of about 34 metres. The first one is called the Clock Tower because of a chiming clock that appeared here in the time of Grigori Orlov. The Signal tower was used as a viewing platform for the guests of the residence. The name originates from an aerial telegraph installed in the tower during the reign of Emperor Nicolas I. You can also observe the spectacular view of the parks, the town of Gatchina and the adjacent area after climbing up 191 steps of a granite spiral staircase. The tower is open during the museum opening hours from 1st May to 1st November.

The first floor of the palace is remarkable for its luxurious state apartments. The White Hall is the greatest one with the area of 250 square metres. It lies in the central section of the palace, and its French windows lead to a terrace that overlooks the parade ground and austere walls of the Kitchen and Arsenal Wings. The White Hall was used for entertainments, receptions and balls.

The Marble Dining Room is one of the most refined Neoclassical interiors of the palace. The room is divided into two parts: a larger area for the guests’ tables and a pantry room. The balustrade between these two spaces is decorated with marble vases.

The Priory Palace is the architectural symbol of Gatchina. This unique building was designed by architect Nikolay Lvov for the knights of the Maltese order and is the only 18th century rammed-earth construction left in Russia.

The supporting wall of the palace is made of Pudozh stone and makes the building look like a fortress. If you look at the palace from the Black Lake you will have an illusion that is rises from the water. The southern part of the palace slightly resembles a gothic chapel.

Location: State Museum-Reserve Gatchina is located 45km south-west of St Petersburg in the town of Gatchina.

How to get to Gatchina:

Take a train from the Baltic train station in St Petersburg to Gatchina-Baltiyskaya or Gatchina-Warsaw.

Gatchina-Baltiyskaya is the closest station to the Gatchina museum. Gatchina-Warsaw is situated on the opposite side of the park not far from the Priory palace.

Trains depart every hour, travel duration is about 1 hour.

Take minibus № 18, 18-А (they depart every 10-15 minutes), exit from the metro to Aviatsionnaya Street. The bus station is behind Vladimir Lenin monument.

Take bus № 431 (it departs every 40-50 minutes), exit from the metro station to Altaiskaya Street, the bus stop is near McDonald’s.

The museum is closed on Mondays and on the first Tuesday of each month.

The entrance to the park is free.

Combined ticket to the Gatchina Palace and the park (park pavilions, the Private Garden) – 500 rubles.

The pavilions and the Private Garden are closed in the winter period and in bad weather conditions.

The Signal Tower> (for groups of less than 9 people) – 60 rubles. You can visit the tower only if you buy a ticket to the Gatchina palace.

Pay attention: the tower is closed in bad weather conditions.

Photo and video shooting fee varies from 50 to 100 rubles.

The web-site of Gatchina museum: http://gatchinapalace.ru 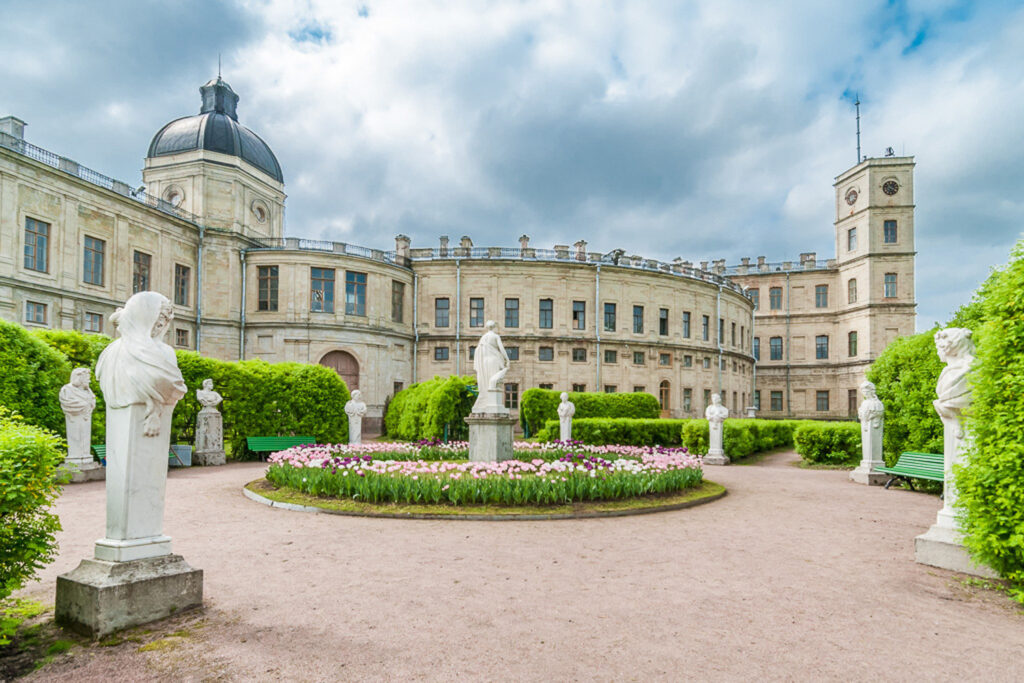