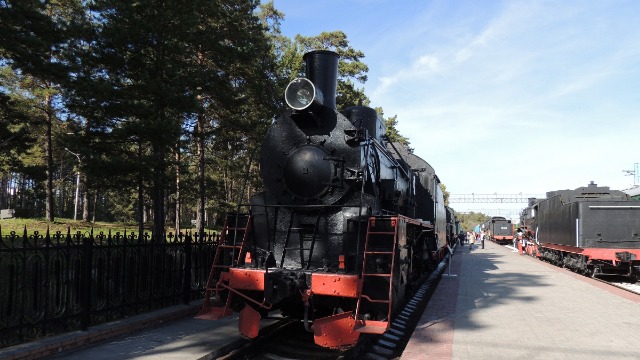 The Novosibirsk Railway Museum is situated in the Soviet district of Novosibirsk. It was established in 2000 and is an open-air exposition with the length of about 3km. The collection includes steam and diesel locomotives, electric locomotives, special work cars, tankers and carriages that were used on the railway in the West Siberian region. Soviet motorcars, trucks and tractors are also a part of the collection.

You can see the history of the railway transport development from the first steam locomotives to the present days.

The Novosibirsk Railway Museum is named after Nikolay Akulinin, a railwayman who started his career in 1946. After retiring in 1984, Nikolay Akulinin began his work on the establishment of an open-air railway museum at Seyatel railway station. About 63 items were collected by 1999. The museum was officially opened on 3rd August 2000, on Railwayman Day.

Different types of carriages are presented in the Novosibirsk Railway Museum too, including passenger, freight, medical, surgery, fire-fighting and even armoured ones. The pride of the collection is a six-axle armoured carriage produced in 1898. A first class passenger cabin is also of great interest. The carriage is divided into two parts, one of which is a compartment and the other – a restaurant with oak furniture and an image of a two-headed eagle on the wall.

Special work cars include snow removal cars, crane cars, track construction and maintenance equipment. “Taran” snow removal car that was produced in the USSR in 1950 attracts much attention of the visitors.
The museum exhibit was enriched by a collection of retro cars in 2006. It includes both Soviet and foreign models. Military and special transport is presented in the Novosibirsk Railway Museum by wheel and crawler off-road vehicles, armoured personnel carriers, tractors and other vehicles.