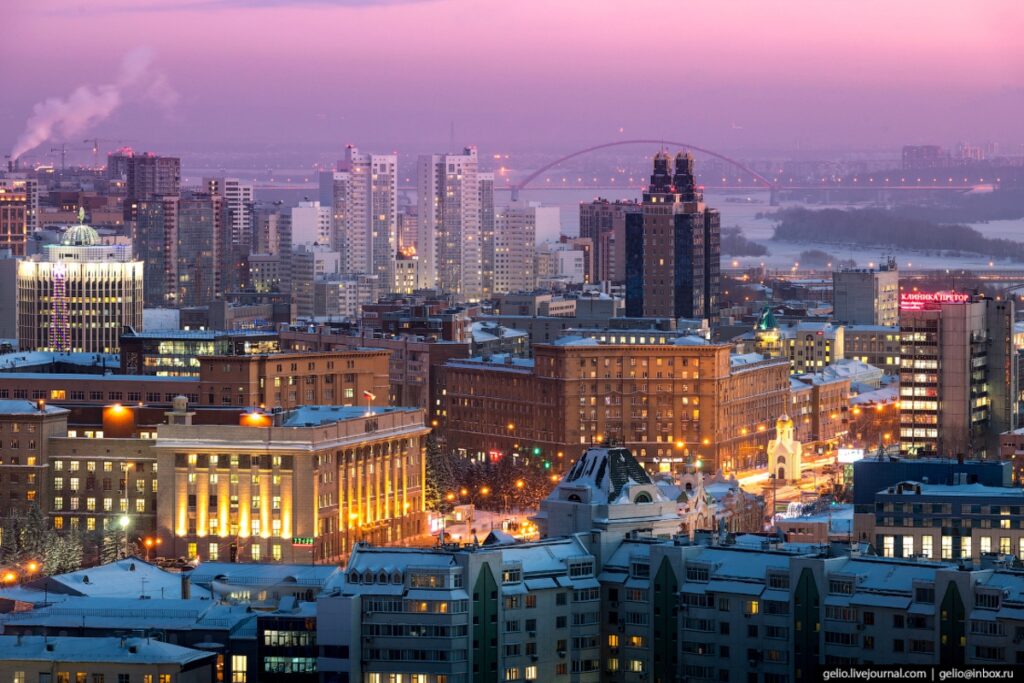 The city was founded in 1893 on a bank of the Ob River during the construction of the Trans-Siberian Railway. The beneficial location, density of the population, well-developed science and manufacturing make the city a non-official capital of Siberia.

Novosibirsk is situated in the south-east of the West Siberian Plain and is one of the most populous cities in Russia, holding the third place after Moscow and Saint Petersburg. Its population is more than 1.5 million people.

The population of Novosibirsk includes more than 80 nationalities. The majority of people are Russians (93.9%). The rest of the population is represented by such nationalities as Germans, Ukrainians, Siberian Tatars, Jews and Belorussians. Koreans, Poles, Finns, Armenians, Azerbaijanians, Buryats, Tajiks and other nationalities are also presented here.

The city was founded in 1893 on a bank of the Ob River during the construction of the Trans-Siberian Railway. Initially the settlement was named Aleksandrovky in honour of Alexander III, the Emperor of Russia. It received the name Novo-Nikolaevsk in 1985. In 1903 the settlement was granted the status of a town. And it was renamed Novosibirsk in 1925.

The city lies on the two banks of the Ob River. The central part is situated on the right bank, as well as the Main Railway Station and the Bus station. Tolmachevo airport is on the left bank.

Novosibirsk has been growing rapidly; its population reached 1 million only 70 years after its foundation.
The main street of Novosibirsk is Krasny Prospect, it is included in the Guinness Book of Records as the longest street without turns with the length of almost 7 km. Novosibirsk Chapel of Nikolaos the Wonderworker, rebuilt at Krasny Prospect in 1993 by the 100 anniversary of the city, is often called the centre of Russia. The original Saint Nicholas chapel was built in 1915 in honour of the 300 anniversary of the Romanov dynasty and was considered the centre of the Russian Empire.

The Novosibirsk Opera and Ballet Theatre, also known as NOVAT, is one of the main symbols of Novosibirsk. It is depicted on souvenirs and in tourist booklets. The building of the theatre is the biggest in Russia.

The majority of dishes in Novosibirsk belong to the Russian cuisine. If you want to try something special, taste pine cone and bud varenye or marjoram and dandelion jam.
Novosibirsk region is rich in berries and mushrooms. You can purchase fresh, frozen or dried mushrooms (chanterelles, honey agarics, ceps, morels, brown, milk and orange-cap mushrooms) and berries (strawberries, raspberries, blueberries, cowberries, cranberries).
You can also find really special treats like chaga mushroom and dried forest ants. Chaga mushroom is a sterile conk that grows mostly on birch trees, its folk name is black birch mushroom.

Novosibirsk is located in the area of dry continental climate with the temperature range from -30C (-22F) in January up to +30C (+86F) in July.
Novosibirsk is great for visiting all the year round. Spring and summer periods are suitable for city tours and sightseeing. In autumn, the forests are rich in berries and mushrooms to pick. Winter Novosibirsk will please you with the abundance of snow, winter fishing, cross-country skiing and dog sledding.
If you wish to see the beauty of the city, we recommend visiting it from the end of May to the beginning of September.