Novodevichy Convent is the oldest and probably the most beautiful functioning cloister in Moscow. The architectural ensemble is the object of the cultural heritage protected by UNESCO. Novodevichye cemetery is located on the territory that borders the Novodevichy convent. 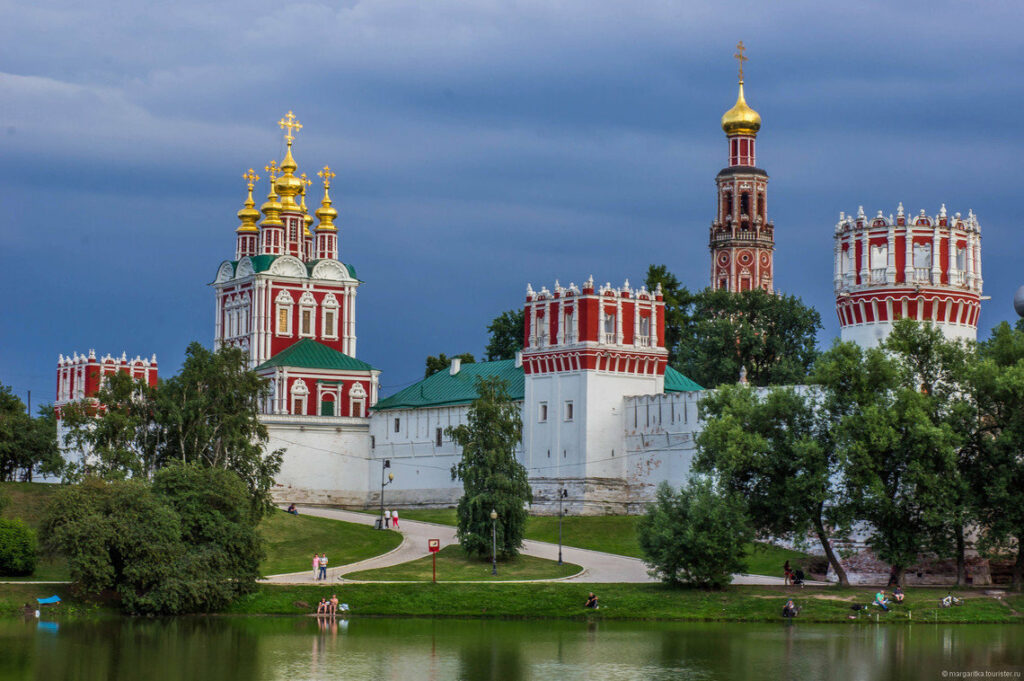 The convent was founded in 1524 by the Grand Prince of Moscow Vasily III after his conquest of Smolensk in honour of the icon Hodegetria of Smolensk. There is one peculiar moment in the history of the convent: the construction works started at the same time as the divorcement process of Vasily III. The Novodevichy Convent possibly was founded for the Great Princess Solomonia Saburova who had had no children for 20 years of her matrimony.

Since that time a lot of royals took the veil there including tsars’ wives and sisters. Tsarina Irina Godunova, the wife of Feodor I, lived here together with her brother Boris Godunov. Not all women came here at their will. Tsarevna Sofia Alekseyevna, the sister of Peter I, was confined in the convent after the Streltsy uprising. One more famous resident of the convent is Tsarina Eudoxia Lopukhina, the first wife of Peter the Great.

Novodevichy Convent is a real fortress with high unassailable walls and brick loopholed towers with white decorations. The main buildings were constructed in the second part of the 17th century and are of Moscow Baroque style. In the 16th-17th centuries the convent was a town gate and a fortress west of Moscow.

Transfiguration of Jesus gate church is located over the main entrance.

5-headed Solensky Cathedral rises up in the centre of the Novodevichy Convent. It was constructed in 1525 and looks exactly like the Kremlin Assumption Cathedral. A 5-tier carved golden iconostasis created by the craftsmen of the Armoury Chamber preserves icons presented by Russian Tsars including Ivan the Terrible and Boris Godunov, and of course the main relic of the convent – miraculous icon of Our Lady of Smolensk. There is a bell tower with white stone lace not far from the cathedral. It used to be the second highest bell tower after the Ivan the Great one and was famous for its unique toll. The oldest bell of the tower was casted during the reign of Ivan the Terrible.
Uspensky Temple with a refectory was constructed by the order of Tsarevna Sofia.

One more relic of the Novodevichy Convent is the ancient miraculous Our Lady of Iveron.

The convent complex also contains a white stone Ambrosievskaya church combined with a refectory, Filatyevskoye school where orphan girls were taught Holland lace making by the order of Peter the Great, a hospital for the Russian army veterans, an almshouse and various chambers. Right of the entrance you can find Lopukhinskaya Tower and behind it – Naprudnaya Tower with a strelets guardroom and Tsarevna Sofia’s chambers. There is a legend that if you touch the wall of Naprudnaya Tower, the place of imprisonment of Tsarevna Sofia, and make a wish – it will definitely become true. Some wishes are written on the walls for greater confidence. The most typical wishes are those of love, health and wealth.

There are several burial places on the territory of the Novodevichy Convent: Volkonsky family mausoleum, the graves of Denis Davydov, general Brusilov, Matvey Muravyov-Apostol, Sergey Trubetskoy. Tsarevna Sofia and some other representatives of royal families are buried in the Smolensky Cathedral.

The Novodevichy Convent did not function in the Soviet period, the monastic life was resumed in 1994. Today it is a functioning cloister and a museum at the same time.

The Setunsky chambers of the convent host an exposition “Moscow Eparchy: yesterday and today” which is open daily from 9 a.m. to 5 p.m.

There are workshops in the Novodevichy Convent. Icon-painting and restoration workshop was established in 2011 and since that time it has been taking orders for making iconostases and temple icons, family and wedding icons and others.

After the convent was reopened for those who wanted to take the veil, a workshop of gold embroidery was organised there. Since that time convent seamstresses use the ancient patterns and techniques for handmaking temple items such as epitaphios, podea, khorugv and others. The workshop organises courses for people willing to get acquainted with the ancient technologies and techniques of the temple embroidery.

There is a picturesque park near the convent on the shore of the Bolshoy Novodevichy Pond. You can enjoy wonderful views of the mighty walls and towers of the convent. In the park there is a lovely sculpture “A Duck with Ducklings” which was presented to the children of the USSR by the children of the United Stated with the spirit of love and friendship in 1991. The idea of the sculpture originates from the famous American fairy tale “Make way for ducklings”.

Service in the Novodevichy Convent is held daily at 7-40 a.m. On Mondays and holidays the early service is at 6-20 a.m., the late service is at 8-40 a.m. The evening service starts at 5 p.m.

Please note! Women should cover their heads and shoulders and men should wear full length trousers when entering an orthodox temple.

How to reach Novodevichy Convent: by public transport to Sportivnaya metro station, then 5-7-minutes’ walk up 10-letiya Oktyabrya Street to pl. Novodevichyego (550m). Go left past Novodevichyi Prudy.
Don’t forget to visit Novodevichye cemetery, which is located on the territory that borders the Novodevichy convent.