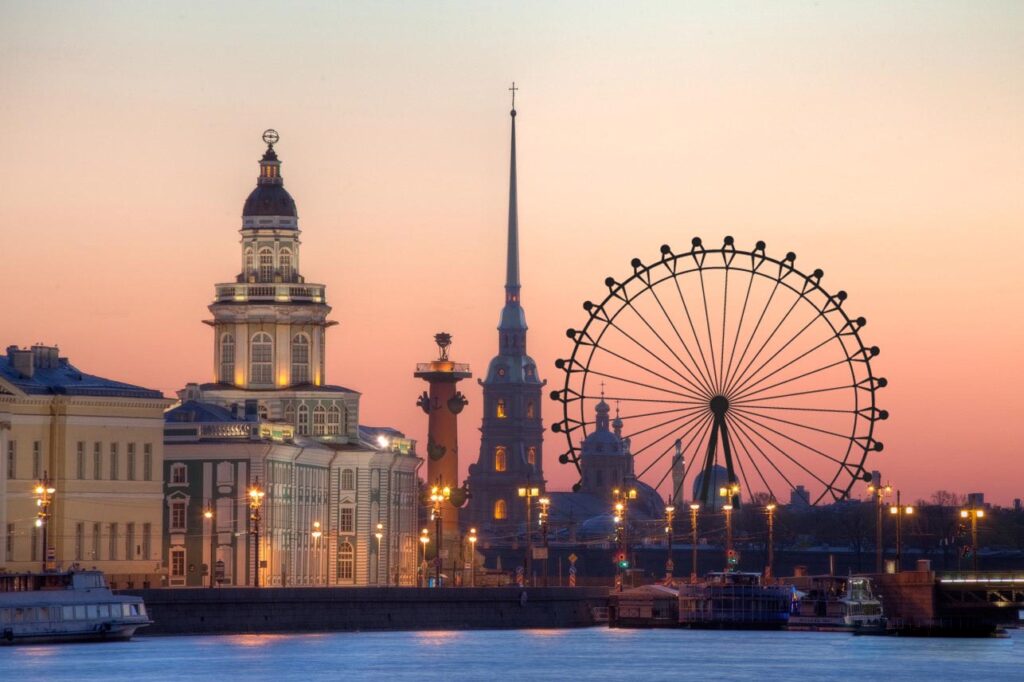 Saint Petersburg is Russia’s second largest city located at the head of the Gulf of Finland and the Neva River. Considered the cultural heart of Russia, St. Petersburg has a lot to offer for different kinds of travelers.

In the beginning of autumn 1917, the approach of German forces to the city forced the government to consider the idea of moving to Moscow. St. Petersburg was the capital of Russia for around 200 years, but on March 12, 1918, the Bolsheviks moved the capital to Moscow, which was easier to defend.

When World War I broke out in August 1914, it was decided to change the name of the Russian capital from St. Petersburg to Petrograd. As Germany was the opposing side in the war, the old name sounded too German.
10 years later after the Lenin’s death, Petrograd was renamed Leningrad. However, in 1991, a referendum was held and majority of the voters supported renaming “Leningrag” to “Saint Petersburg”.

Since 1991 the Historic Centre of Saint Petersburg and Related Groups of Monuments have been listed by UNESCO as a World Heritage Site.

Considered the cultural heart of Russia, St. Petersburg has a lot to offer for different kinds of travelers: high art, stunning architecture and lively history, as well as wild nightlife and adrenaline-fuelled activities.

The city boasts numerous churches and cathedrals; they are not only architectural masterpieces, but also an important part of the religious life of the city. Being multinational, Saint Petersburg houses churches of various faiths: Orthodox, Roman Catholic, Armenian-Gregorian, Protestant churches, synagogues, mosque, datsan, etc.

Another distinguishing feature of the city is a large number of bridges. The network of 68 rivers and canals crosses the city and forms 42 islands. For this reason, Saint Petersburg is often called “the Venice of the North”.

Since the founding of the city, the bridges play an essential role in St. Petersburg’s infrastructure. The city and its suburbs have 580 bridges (including 20 drawbridges), some of which are architecture masterpieces.

Saint Petersburg is a year-round destination. No matter when you go to St Petersburg there are always things to see and to do. Avoid the summer crowds with a spring trip. The most celebrated city’s holidays fall on May – Victory Day and the day of the city foundation. The annual launch of fountains in Peterhof also takes place in Spring, in the beginning of may. Colorful celebration is usually followed by pyrotechnic, light and music show.

Summer is a peak tourist season because of nice weather and the White Nights. During the White Nights, the sun hardly sets and tourists can admire the panoramas of the nighttime city. Generally, this period lasts from around June 10 to July 2. An International music festival takes place during the White Nights. The program includes performances at Mariinsky Theatre and concerts at the Philharmonia. Besides, summer is an ideal time for boat rides through the canals.

Autumn is a quieter and more relaxed time to visit St. Petersburg. Its main attractions change the background color to autumn colors – yellow and red. Ceremony of closing fountains in Peterhof takes place annually in mid-September. This is a gorgeous show, which combines music, lights, ballet and, of course, fountains.

In winter, very few tourists visit the city, so you will not see the long queues of the summer at the famous tourist attractions. In addition, streets and cathedrals look gorgeous in the snow.

To make sightseeing in St Petersburg more convenient visitors can purchase Saint Petersburg Card that provides free entry to over 50 best museums of the city, free or discounted tours, a rechargeable transport e-purse, cost-saving special offers and discounts. There are 4 types of Saint Petersburg Card depending on its duration: 2, 3, 5, 7-day cards. See more details.