The Saviour Monastery of St Euthymius (also known as Spasso-Ephimovsky monastery) was founded in 1352 by Boris Konstantinovich (Grand Prince of Suzdal and Nizhnigorod). It also served as a fortress reinforcing the town’s northern entrance. 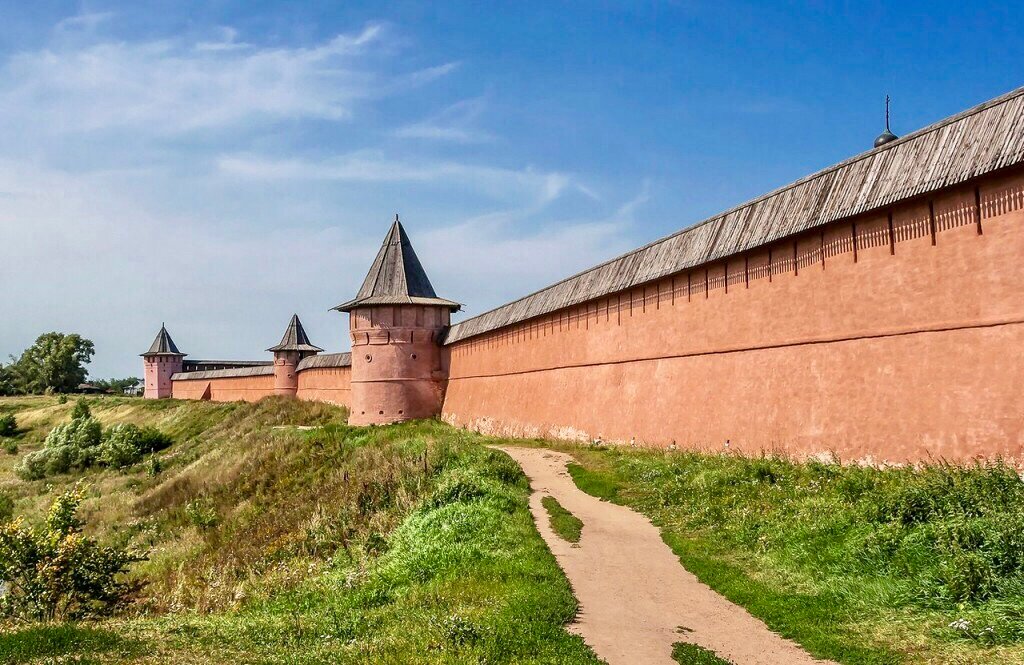 Initially the monastery was wooden but it was burnt in 1664 during the Polish invasion. The present brick walls with 12 towers dating from the 17th century are 6 meters thick and 7.5-8.5 meters high. One of the towers stands out among the others. This impressive entrance tower of 22 meters high is located in the south wall of the monastery. It has two arches which house a bookshop and a ticket office.

The first hegumen of the monastery was Reverend Euthymios of Suzdal who served the monastery for 52 years and was a spiritual companions of St. Sergius. A century later he was canonized and the monastery was named after him. In 1564, a small temple over the tomb of Euthymios was erected and later it grew up into the current Transfiguration cathedral.

In the 16th-17th centuries, the monastery grew in importance after donations by Vasili III, Ivan IV (the Terrible) and the Pozharsky family, a noble dynasty of the region. Consequently it became the largest monastery of Suzdal.

In the second half of the 18th century during the reign of Catherine II (the Great) a prison was established in the monastery. Originally it was intended for religious dissidents, but during the Soviet era it was also used for all kinds of prisoners.

The principal temple of the monastery, the Transfiguration of Our Savior Сathedral, was built in 1594 on the model of the Assumption Cathedral of the Moscow Kremlin. The highlight of the cathedral are the frescos on its facades and the murals by famous XVII-century masters Gury Nikitin and Sila Savin. The cathedral contains the tomb of Prince Dmitry Pozharsky, the leader of the Russian army that drove the Polish invaders from Moscow in 1612. Pozharsky family was one of the biggest sponsors of the Monastery.

The 1525 Assumption Church is the unique structure of its epoch, because it combines the temple and the refectory. The church adjoins the old Father Superior’s chambers, which house a display of Russian books from the 15th century. The monks’ quarters contain a museum of modern Russian folk art.

The architectural ensemble of the Saviour Monastery of St Euthymius represents an example of the traditional monastic architecture of the XVI-XVII centuries and is included in the UNESCO world heritage list.

Entrance fee: 400 rub for the whole museum complex. You will most likely pay half price a couple of hours before the closing.

Opening hours: daily from 10.00 to 18.00 except Monday and last Thursday of each month