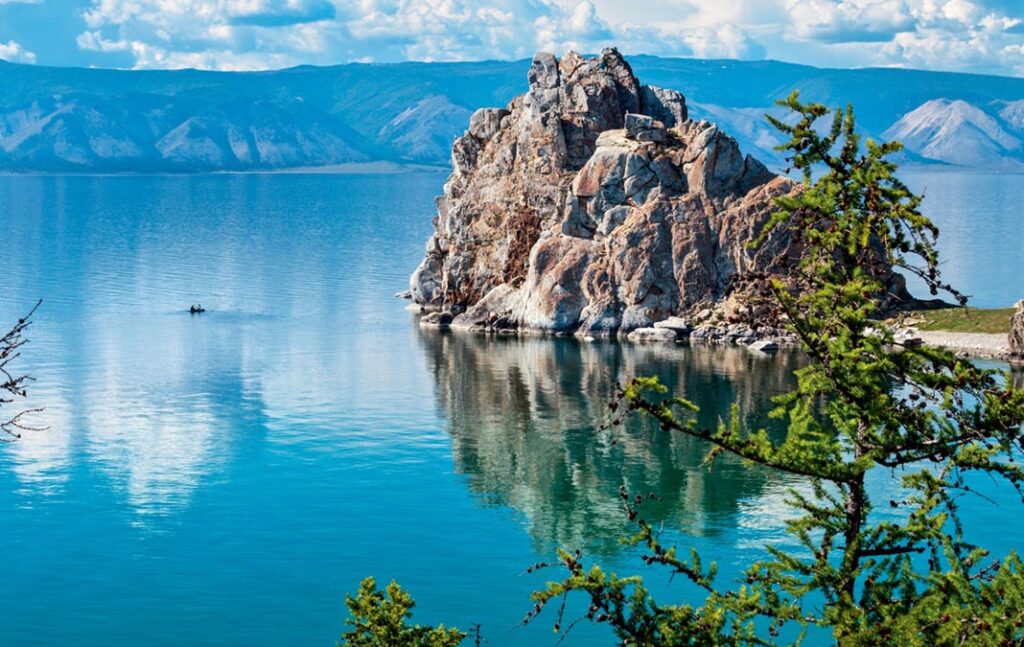 Islands: 27. The biggest is Olkhon Island

Lake Baikal is located in south-eastern Siberia, in the Republic Buryatia and the Irkutsk region. It harbours an outstanding variety of endemic flora and fauna. From 2008 the Baikal is on the list of the Seven Wonders of Russia.

The origin of Lake Baikal has been exciting minds of scientists for more than a century. According to one version the Baikal is a remnant of an ancient ocean, but it is not clear why its water is fresh. The other version says the lake is a result of tectonic forces actions. Then how did inhabitants of the World Ocean get into the Baikal? To this day, the lake is fraught with many mysteries.

Almost all freshwater lakes in the world are less than twenty thousand years old. The Baikal is estimated to be 25 million years old so it is 1250 times older than other lakes. Furthermore, the lake has no signs of aging!

The Baikal is located in south-eastern Siberia, in the Republic Buryatia and the Irkutsk region. It harbours an outstanding variety of endemic flora and fauna. 80% of the species at the Baikal are endemic. It’s one of the biggest centres of biological species origin. There is no other lake on Earth with such a rich biodiversity. That is why Lake Baikal is also called the ‘Galapagos of Russia’. In 1996 UNESCO recognized it as a world heritage site. From 2008 the Baikal is on the list of the Seven Wonders of Russia.

Lake Baikal has become a popular tourist destination in recent years due to its wonderful beauty, rare species, and innumerable protected sites. Surrounded by steppes, meadows, marshes, tundra and high mountains stretching for 2,000 km it is home to many animals such as bears, sables, wild goats, elks, lynxes and others. In western part light coniferous forests and mountain steppes dominate; in the eastern part there are mainly pine forests; and deciduous forests are typical for the north area.

The largest bays are Barguzinsky, Chvirkuisky and Proval. Over three hundred rivers flow into the lake (the largest is the Selenga River) and only one, the Angara flows out. There are 26 rocky islands and most of them are uninhabited. The largest is Olkhon Island, which is the second largest island-in-a-lake in the world. According to a local legend, Genghis Khan was born on Olkhon Island.

The Baikal is one of Asia’s holy places. Buryats have quite a few legends about spirits and sacred sites of the Baikal. Over the centuries they have prayed to the lake and have believed in its power. Various names such as Sacred Lake, Spiritual Waters and Holy Sea have been given to the Baikal. As can be seen some people call Lake Baikal “sea” because of its enormous size. Moreover the lake is steadily expanding and ultimately will turn into a new great ocean. As evidenced in recent thermal vents on the lake’s bottom, tectonic forces are still going on. Usually there is a big earthquake every two years, however, almost nobody is being hurt or wounded. On the average there are up to 2000 less strong earthquakes a year or six a day.

The Baikal is one of the cleanest surface water reservoirs on Earth. Some people feel uncomfortable when they look over the side of a boat and are able to see 131 ft/40 m downward. A combination of three factors is responsible for the process of self-purification: the depth of the lake, its huge volume of water, and its geographical position. This process produces extraordinary clear water. In addition, there is about four miles (6,5 km) of sediment in the basin: sand, pebbles, gravel, and clay. Thus the giant reservoir is well-protected against any contamination.

Apart from being exceptionally clear, the water is quite cold. The surface temperature in August in the middle of the lake is about +9 C and along the shore +15 C. Below the surface, the water temperature drops. Even in summertime at a depth of 50 meters, the temperature is about +5 C. After the first few months of winter, the entire surface freezes and the lake could be crossed on foot. At the end of April the melting process begins in the north-western part of the lake and spreads to other parts of the lake.

Lake Baikal changes its face every season. July and August are the best months for swimming, sunbathing and also for the summer activities like trekking, camping, biking, hiking through taiga, fishing and kayaking. During the hot period the shore is overcrowded with tourists. The weather from December to March can be cold and snowy but the climate around the Baikal is much milder than in the rest of southern Siberia. The weather conditions are favourable for skiing, dog-sledging and ice-fishing. In winter it is possible to cross the frozen lake and admire amazing transparent ice of Lake Baikal, fancy ice caves and grottos. In late winter and early spring you can encounter a new-born Baikal seal pups.

The most unique animal at Lake Baikal is the freshwater seal (lat. Pusa Sibirica), known as nerpa. It is the only fresh water seal in the world. Its entire population is land-locked in the freshwater of Lake Baikal. The mystery of how the seal became trapped in the lake continues to puzzle scientists. Besides being a freshwater lake, the Baikal is hundreds of miles away from any other sea or ocean. One theory says that the Baikal seals are gone down from predecessors in the Paratethys Sea, which covered south-east Europe until 2-3 million years ago. An opposing hypothesis is that the seals are of Arctic ancestry, and migrated south through a network of rivers and lakes. Eventually the nerpa has evolved some amazing adaptations. Reaching a maximum size of 1.5 m and 90 kg, the Baikal Seal is one of the world’s smallest seals. Due to the low light conditions under the ice the seal’s eyes grew surprisingly large in comparison to the body size. The seals have been hunted for thousands of years. Archaeologists have found seal hunting weapons in the dwelling of early seal hunters.

Lake Baikal is 636 km (395 mi) long. Its length is comparable to the distance between Moscow and St. Petersburg.

The Baikal symbol is omul (lat. Coregonus autumnalis migratorius Georgi). This fish belongs to the salmon family and there are five omul species in the lake. It is considered that the ancestors of omul came to Lake Baikal from the Arctic Ocean. One hypothesis is that a group of omul, going with the stream up Arctic rivers to spawn, got in Lake Baikal and took a fancy to these places for breeding and development. At present, omul is a valuable commercial endemic fish.

Local people can offer the fresh fish cooked according to the traditional recipes: salted omul served with boiled potato and onion; ukha (fish soup), cooked with a shot of vodka; smoked omul, still hot, cooked in front of your eyes. When it comes to tenderness and gustatory qualities of meat, omul knows no rivals.

The Baikal holds twenty percent of the Earth’s fresh water. It could provide the world’s population with enough drinking water for 50 years.

Another remarkable endemic fish of Lake Baikal is golomyanka (lat. Comephorus). It’s a primary food source for the Nerpa.

There are some amazing facts about the golomyanka:

About 500 billion cubic meters of natural gas is located in the delta of the Selenga River. This amount would be enough to provide the fuel needs of Canada for some 5 years.

Animals can live in the entire lake and even in the bottom layer because the water is surprisingly highly saturated with oxygen. Hot oxygenated water from thermal springs gets into the lake and mixes with currents causing oxygen to be distributed everywhere. Scientific research has shown that oxygen content in the deep water is 3-4 times higher than in any ordinary water: Baikal water – 12 mg/l; ordinary water – 3-5 mg/l. Oxygen content in water is really unique for natural sources.