“Around the Baikal” tour. On this boat tour you will travel by variety of water vehicles watching slowly changing landscapes or getting adrenaline rafting the fast mountain rivers. 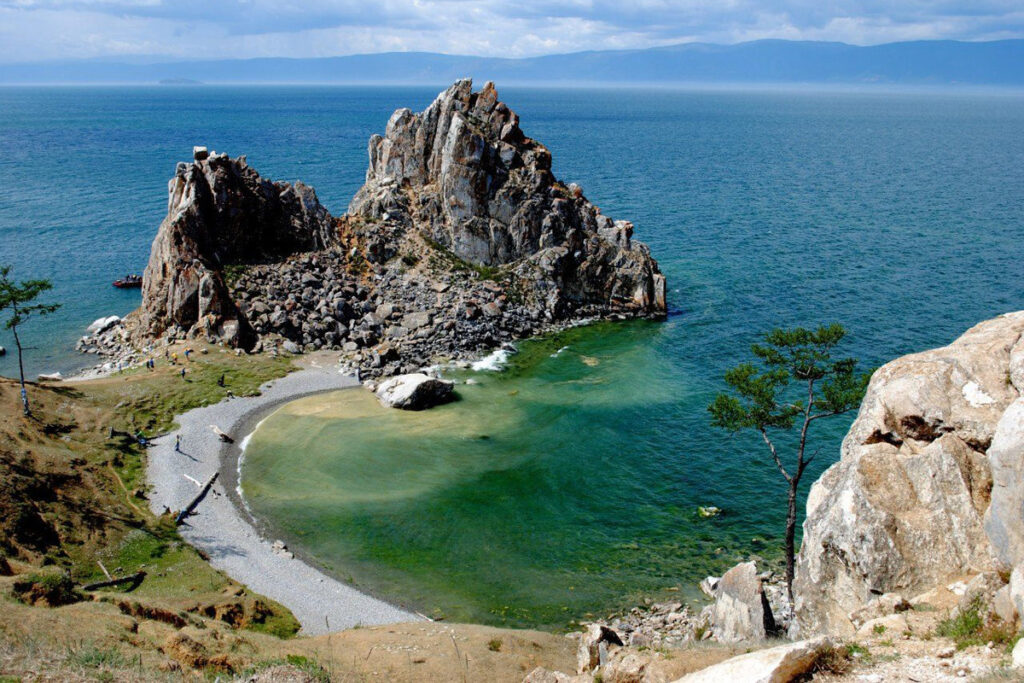 Olkhon is one of the most beautiful and mysterious places of the Baikal, rich with wonderful nature sights. Here one can find a unique variety of landscapes, including cliffs and sandy bays, thick woods and bare steppes. There are several interior lakes on the island.

Olkhon has a rich history. The archaeological exploration of ancient sites of Olkhon Island began in the XlXth century: cult holy places, sites of ancient settlements, remains of walls and fortifications, burial sites, and cave paintings.

Olkhon has a rich history. The archaeological exploration of ancient sites of Olkhon Island began in the XlXth century: cult holy places, sites of ancient settlements, remains of walls and fortifications, burial sites, and cave paintings. More than 150 archaeological sites including settlements of ancient people Kurikans were found on the island. For protection they had to erect fortified towns and walls, some of which exist to this day.

Olkhon Island is the Mecca of Shamanism in Siberia. Locals often refer to shaman for various consultations. It is believed that spirits of the Buryat pantheon live in cliffs of the island. A lot of legends about Olkhon and its sacred places are passed down from generation to generation.

The administrative center of Olkhon Island is Khuzhir village. It is located on the north-western shore of the island. Burkhan Cape, one of the key attractions of Olkhon, is within walking distance of the settlement. 1200 people permanently reside in Khuzhir. A long sand beach extends along the village.

As a rule, accommodation in the village is not a problem. There are 2 options of staying in Khuzhir: hotels and guest houses. Overnight rates vary from 500 rub to 1000 rub for guesthouses and from 1000 to 3000 rub for hotels. A stay in a guest house typically includes breakfast, sometimes dinner might be included as well. Accommodation in a guest house gives the opportunity to experience a traditional Olkhon lifestyle.

There is a museum of local lore in Khuzhir. It houses a rich collection of archaeological finds. Over three thousand exhibits introduce visitors to the history and legends of Olkhon Island. Shamanism items, ancient domestic appliances of Buryat people, numismatic collection, collection of stones and minerals are presented in museum. The museum is open daily (except Monday) from 10.00 a.m. to 6.00 p.m.

To get to Olkhon Island (Khuzhir):

The island is best reached from Irkutsk. To get to Olkhon from other places (for instance, from Ulan-Ude) you still have to get to Irkutsk first.

By car: rout Irkutsk – Ust-Orda – Bayanday – Elantsy – MRS – Khuzhir. A ferry operates between MRS and Khuzhir. From May to December the ferry service is free.

By boat: a boat service operates to Olkhon Island in the route Irkutsk – Nizhneangarsk (See boat timetable and fares).  The boat following the rout Irkutsk – Nizhneangarsk stops in Zagly Bay which is located in the southern part of the island (Latitude: 53°02’39″, Longitude 106°57’56″ E). There is no regular public transport linking the bay and Khuzhir so you should contact the hotel to pre-arrange a transfer.