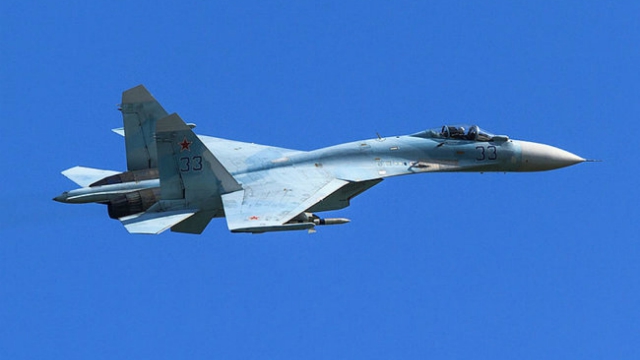 The flight simulator provides a complete representation of the 180-degree cockpit layout and gives you the physical feel of controlling the jet including overload of +3g due to a special flight suit and a belt system. The simulator cabin is installed on the motion platform that imitates turns and turbulence.

Before the flight you will have a basic lecture of the cockpit design, buttons and levers. Then you’ll learn how to perform take-offs and landings under the guidance of your instructor.

This fantastic SU-27 fighter jet flight simulator is the only one of its kind available to the public in the world!

The Su-27 (NATO designation Flanker) is the front-line fighter aircraft designed by the Sukhoi Design Bureau. The aircraft is equipped to operate autonomously in combat over hostile territory, in escort of deep-penetration strike aircraft and in the suppression of enemy airfields. The aircraft provides general air defense in cooperation with ground and airborne control stations. A shipboard version of the Su-27 is the Su-33, with canards and folding wings.

No previous experience is required and you will have a instructor with you at all times!

The tour takes place in Moscow.

MAKS air show has traditionally hosted the most significant flight programs in the world both in terms of the number of aircraft in the sky and the total duration of flights, and of course, Maks Air Show will not be an exception.