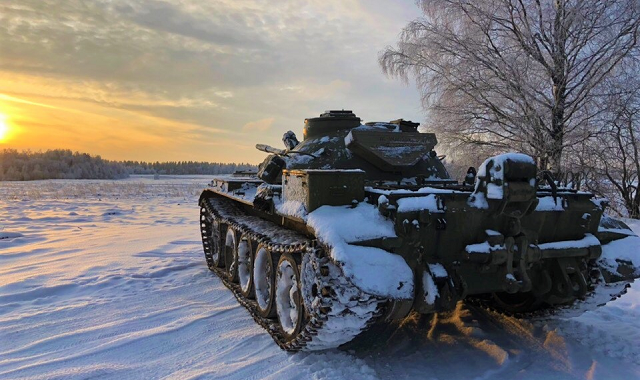 On the Saint Petersburg Military tour, you will be able to ride armoured vehicles, learn about WWII and the Russian army, practice disassembly and assembly of the legendary AK-47 and try other military activities.

On the Saint Petersburg Military Tour, the visitors are allowed to drive vehicles. Our instructor will introduce you to the technical characteristics of the tank and teach you how to control it. Then you will be able to drive independently. A specially designed route will make you feel like a real tankman on a battlefield. The super-powerful armoured vehicles will not leave anyone indifferent.
In addition, you can book target shooting with an AK-47 mockup (looks like a real rifle, but shoots with small safe bullets) or shooting real firearms with blank ammunition.

Please note! The tank tours are also available in other Russian cities:

The price doesn’t include:
– BRDM driving – 4000 rub per person
– Food and beverage

Military quest
This thrilling military game will allow you to plunge into the atmosphere of a military operation. The participants will be provided with a real armored vehicle, equipment, and weapons. The scenario of the realistic military game involves terrorists and searches for a black box. Rest assured you will have an unforgettable experience! Military uniform included.

Big military-tactic show
A real theater of war will play out in front of you. The show includes evacuation of the wounded and involves several military cars, armoured vehicles, guns, explosions, and smokescreens. The visitors might participate in the show and learn combat tactics and battle survival. Military uniform, field lunch, adrenalin, and smell of gunpowder are included!

To have more fun combine tank ride with any activity from the list below:

Nothing is more thrilling than hearing the metal crumple and the glass shatter as you smashing a car by a 30-ton military vehicle.
MT-LB: 65,000 rub
Tank: 105,000 rub

Military tactics lesson includes training in the skillful handling of weapons and military equipment, deployment of groups in battle formations and tactics in conditions of high risk and potential threats.
Price: 7,000 rub per group of up to 8 people

Brave guys in real camouflage, with assault rifles and chevrons. The emotions are the most real and the aftertaste is like on the set of a blockbuster. The best Bachelor Party Idea is a groom kidnapping with the chase. We guarantee adrenaline and incredible impressions!
Price: 15,000 rub per group of up to 8 people

Firetag is another great stag party idea. In contrast with lasertag, firetag game involves real blank firing guns with IR emitters and IR sensors that detect if you are hit. You will be given a real 7.62mm Kalashnikov with blank ammo. The game is available even for a small group (1-3 people). The staff of the military ground might complement your team or play on the enemy side.
Price: 4,000 rub per person (20 bullets included)

Experience Russian traditional off-road ride along difficult paths with puddles, ravines, mud, snow, or sand – all that ordinary cars are afraid of is good for Russian UAZ!
Price: 8,000 rub per group of up to 3 people

Master class of Assembly/Disassembly of Kalashnikov

The master class will cover step by step instructions on the maintenance, disassembly, and reassembly of AK-47. You will be able to compete with the members of your group for the fastest disassembly or against the clock if you wish.
Price: 6,000 rub per group of up to 8 people

Learn the art of throwing knives, test your skill and aim, and practice concentration.
Price: 10,000 rub per group of up to 8 people

Imitation of a chemical attack

A chemical attack is the spreading of toxic chemicals with the intent to do harm. The training is designed to teach our visitors how to react correctly to a chemical warfare attack and use protective equipment properly.
Price: 13,000 rub per group of up to 8 people

Mine clearance is the process of removing land mines from an area. In military operations, the object is to rapidly clear a path through a minefield.
Compete who is the faster to clear the field from mines!
Price: 7,000 rub per group of up to 8 people

Learn drill commands and techniques with and without weapons. A great fun for a group of friends.
Price: 2,500 rub per group of up to 8 people

A real armoured vehicle will come to bring you to any place. Find out what it is like to arrive at the restaurant in a military car. Just imagine – you are getting out of the car like a boss…
Price: from 40,000 rub depending on route

A professional photographer knows the best angles for military photo shooting. He will accompany you while you are on the military ground, riding tanks, shooting weapons, and doing other activities.
Price: 5,000 rub per group of up to 8 people

It is nice to end the open air activities with a delicious military lunch and a shot of vodka. Vegetarian menu is available.
Price: 7,000 rub per group of up to 8 people

Please note! The above prices do not include:
– Transfer to the military ground (from 5,000 rub)
– Food and beverage unless specified
– Military uniform unless specified

On the Saint Petersburg Military tour, you will find a roar of an engine with a capacity of more than 300 hp and unforgettable impressions!