Tour price: from 16000 rubles per person

* There is a short version of the tour that last 3 days/2 nights. 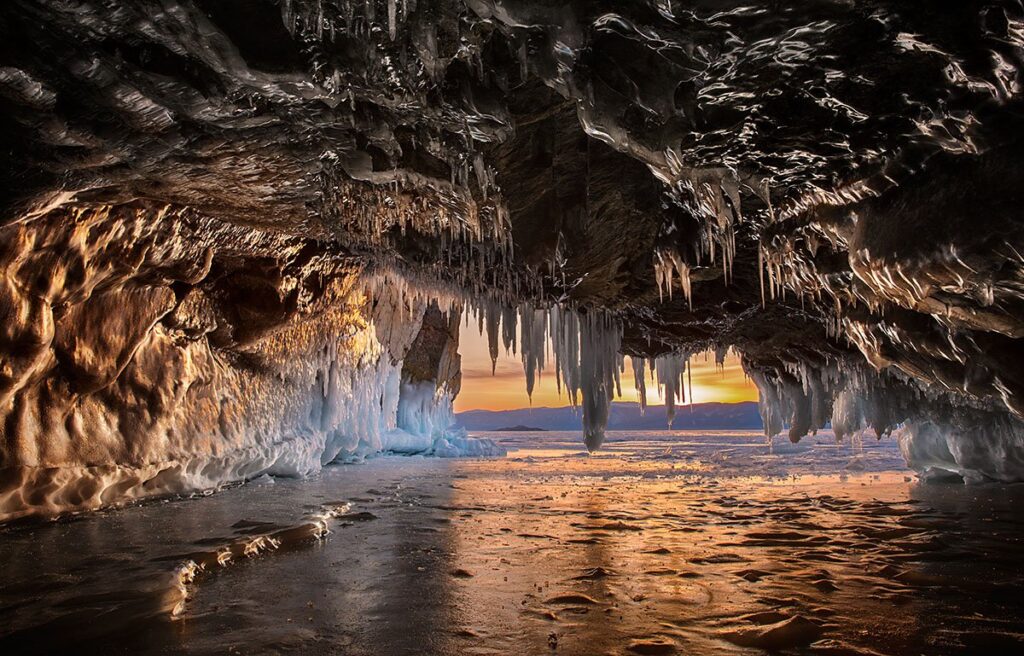 The underground world is rich and diverse. On the Baikal Caves tour, you will visit the most hidden corners of the Baikal shore and the Tageran steppe. You will explore several caves and admire their spacious halls and narrow passages, stalactites and stalagmites, crystals of ice and corallits. Most of Baikal caves are even older than the lake!

No need to have special training to visit the caves. Equipment is provided.

Description of the Baikal Caves tour:

Day 1
Hotel/airport pickup. Transfer to Maloye Morye Strait. Lunch at a roadside café. A small tour of Sagan-Zaba bay.
Sagan-Zaba Bay is famous by its petroglyphs presumably created in the Bronze Age – Late Iron Age. The most ancient drawing is about 4,000 years old. The petroglyphs of Sagan-Zaba is a composition of figures of people, animals and birds. The drawings were first discovered in 1881. Subsequently, Russian and international groups of archaeologists have carried out numerous archaeological expeditions for detailed study of the drawings.
The petroglyphs are not the only archaeological remains of the bay. There are numerous traces of ancient men next to Sagan-Zaba cliff.
The further way goes through the Tageran steppe. The combination of rocks, hills and meadows make up a scenic picture of the steppe.
A tour of Aya bay, which boasts four caves with petroglyphs and a wonderful beach.
In the evening, we will set up a camp, and have a dinner.

Day 2
Breakfast. Visit to the caves of Aya bay. Cave Aya is a longest cave on the shore of Lake Baikal. The length of the inner passage is about 1300 meters. Since ancient times the cave has been one of the most revered shamanistic places. On the walls of the cave, there are incredible formations named calcite corallits. They appeared thousands years ago on the shores of the ancient lakes, which no longer exist. Skeletons of the snakehead fishes have been found in the sediments of the cave. They inhabited the Earth 20 millions years ago.
Our next journey is toward Vologodsky cave. It was called a “trap” due to its bad reputation. Its steep passageway goes deep down, and unwary animals sometimes fell into it. A theory says that the cave’s bottom is located at the same level as the bottom of Lake Baikal.
We are going to the observation point, which offers a wonderful view of the valley of the river Anga.
After a snack lunch, we will go to the Valley of Stone Spirits. There is a big number of different bizarre-shaped rocks standing at the middle of plateau of the Tageran steppe. Local legend tells, that they are ancient warriors, turned into a stone by the main spirit of this area.
In the evening we will set up a tent camp and have a dinner.

Day 3
Breakfast. After dismantling the camp site we head to Cave Bolshaya Baidinskaya, which served as a shelter for the Siberian tribes named Kurykany.
The most beautiful and impressive Сave of the Baikal shore is Cave Mechta (Dream). It is officially recognized as a natural monument. Today the cave is under state protection. It was was discovered in the sixties. Cave Mechta is characterized by its 200 square meters underground ice field, a great number of branches presented by grottos, halls, and dead ends. High passageways let visitors not to stoop while walking along the cave. One of the most beautiful stalagmites, Strazh (Guard) is 4 meters high.
After a quick snack lunch, we will walk toward mountain Tan-Khan. It offers an amazing view of Maloey Morye Strait and Olkhon Island.
By the evening, arriving to the camping. Dinner and spare time.

The price does not include:
– English-speaking guide. Other languages are also available (German, Cheneese, etc). The cost is 6000-10000 Rub per day depending on season and language.
– Insurance against tick-borne encephalitis
– Accommodation in Irkutsk

Circum-Baikal Railway tour. Spend a day in a comfortable train moving along Lake Baikal shore by the old railroad through tunnels and bridges built during the Tsarist Russia in 1902-1904.

On the Baikal Helicopter tour, you will see the unforgettable Baikal landscapes and the Circum-Baikal railway from a bird’s-eye view.

Spend your vacation in the Floating hotel “Ecotur” which is located in Chivyrkuysky Bay, the most magnificent bay of Lake Baikal.

“Around the Baikal” tour. During this boat tour you will travel by variety of water vehicles watching slowly changing landscapes or getting adrenaline rafting the fast mountain rivers.

When you are at Lake Baikal area you can have the unique opportunity to visit a Shaman in Ust-Orda village or on Olkhon Island. You’ll be able to ask the Shaman all your questions and take part in the rituals of the Shamanism.

One-day Fishing trip on Lake Baikal give you a chance to spend a day enjoing the stunning beauty of the Baikal’s nature and experience the excitement of fishing.

A Real Icy Banya! Such an exotic place actually exists and is located on the shore of Lake Baikal.

Whatever rout of the Full-day snowmobile tour you choose, either through taiga or over frozen surface of the lake, make sure you’ve got your camera with you because the views are breathtaking!

Hot Springs Arshan tour.A real fairy tale awaits you on Arshan tour! Down caps of treetops, blue, green, black, white ice of Lake Baikal, sun, walk along the lake on foot and by car, hot springs with amazing views of the majestic snow peaks bring resemblance to the Swiss Alps and Tibet at the glance of a globe rover.