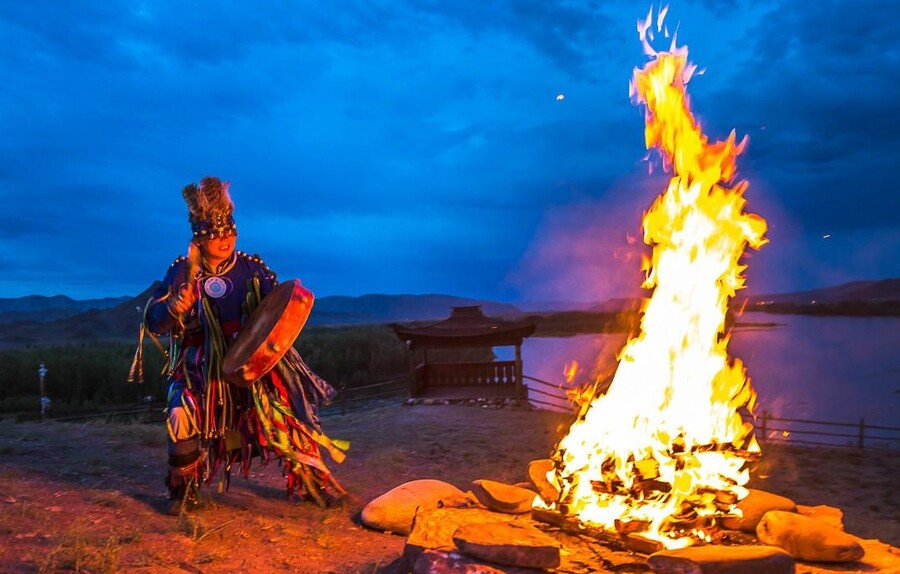 The land of the Turkophone peoples which runs from Baikal to the Gobi has long been known as a classic country of shamanism. The successors of the ancient shamanic traditions on this land were Buryat-Mongolian shamans, who were famous among other shamans for a special force of inspiration in the performance of shamanic hymns.
The birthplace of shamanism, the “chosen land” of shamans, is considered to be Central and North Asia, and the sacred centre of the shamans of the northern world – the island of Olkhon on Baikal. Due to its isolation, the island of Olkhon in the centre of Baikal became the last stronghold of the shamans of North Asia.
Since the mid-1980s, shamanism, the original and ancient religion of the inhabitants of these places has been revived everywhere in the Tunkа Valley and throughout entire Siberia.

Shamanism is one of the most ancient religious traditions of mankind, preceding the emergence of world religions. Pagan beliefs associated with the veneration of ancestor spirits, gods and goddesses of Heaven and Earth go back to ancient times as far as Neolithic.

It was believed that every natural phenomenon, geographical object, craft, family, family, the disease has a spirit, and that man can influence the gods and spirits through sacrifices, adherence to certain rules and traditions.
The man who made the connection between the world of people and spirits became a shaman. A shaman, entering into a trance (in modern terminology – a changed state of consciousness, in Buryat shamans – into “ongo”), could travel into the world of spirits, outside our space and time (subtle worlds, twisted reality) and find there what caused disease and banish evil spirits and prophesy.

Where you can meet a Shaman:

1. Ust-Orda village. Ust-Orda is a Buryat village 70 km away from Irkutsk which is famous for traditional Buryat culture handed down across the generation. On the tour, you can taste the national dishes of the Buryat cuisine as well as buryat buuz, omul, etc. (paid extra). The tour takes about half a day. Visit Shaman in Ust-Orda if you are short of time and cannot go far from Irkutsk.

2. Olkhon island. Incredibly beautiful Olkhon Island is the third-largest lake island in the world 250 km away from Irkutsk. You need to have at least 2 days left to get to the island, see some of its attractions, and visit a Shaman.

3. Villages of the Tunka Valley. A visit to a Shaman could be combined with the tour to Arshan village. This option will suit you if you would like not only to visit a Shaman and see rituals but explore some natural sights of the Tunka valley as well.

No matter where you go to meet a Shaman, you will see rituals and be involved in the historical, religious, and spiritual sphere of the native people’s life.
Shaman will meet the guests and tell them the next steps and rituals. The Shamans speak Russian and our guide will translate and help you do all Shaman tasks.

You’ll be able to ask the Shaman all your questions, take part in the rituals of the Shamanism. Besides, on Olkhon Island you’ll visit the Places of the Power where you’ll get the energy and feel the spiritual upsurge.

In addition, you will learn about the Buryat folklore, visit the local museums and participate in national games.

Prices for the Shaman tour on Olkhon island or in the Tunka Valley are upon request.

The price does not include:
– Meals and drinks

Whatever rout of the Full-day snowmobile tour you choose, either through taiga or over frozen surface of the lake, make sure you’ve got your camera with you because the views are breathtaking!

On the Baikal Caves tour you will explore several caves and admire their spacious halls and narrow passages, stalactites and stalagmites, crystals of ice and corallits. Most of Baikal caves are even older than the lake!

Circum-Baikal Railway tour. Spend a day in a comfortable train moving along Lake Baikal shore by the old railroad through tunnels and bridges built during the Tsarist Russia in 1902-1904.

On the Baikal Helicopter tour, you will see the unforgettable Baikal landscapes and the Circum-Baikal railway from a bird’s-eye view.

A Real Icy Banya! Such an exotic place actually exists and is located on the shore of Lake Baikal.

Spend your vacation in the Floating hotel “Ecotur” which is located in Chivyrkuysky Bay, the most magnificent bay of Lake Baikal.

“Around the Baikal” tour. During this boat tour you will travel by variety of water vehicles watching slowly changing landscapes or getting adrenaline rafting the fast mountain rivers.

One-day Fishing trip on Lake Baikal give you a chance to spend a day enjoing the stunning beauty of the Baikal’s nature and experience the excitement of fishing.

Hot Springs Arshan tour.A real fairy tale awaits you on Arshan tour! Down caps of treetops, blue, green, black, white ice of Lake Baikal, sun, walk along the lake on foot and by car, hot springs with amazing views of the majestic snow peaks bring resemblance to the Swiss Alps and Tibet at the glance of a globe rover.